Hedy Mandl at the Opera Ball 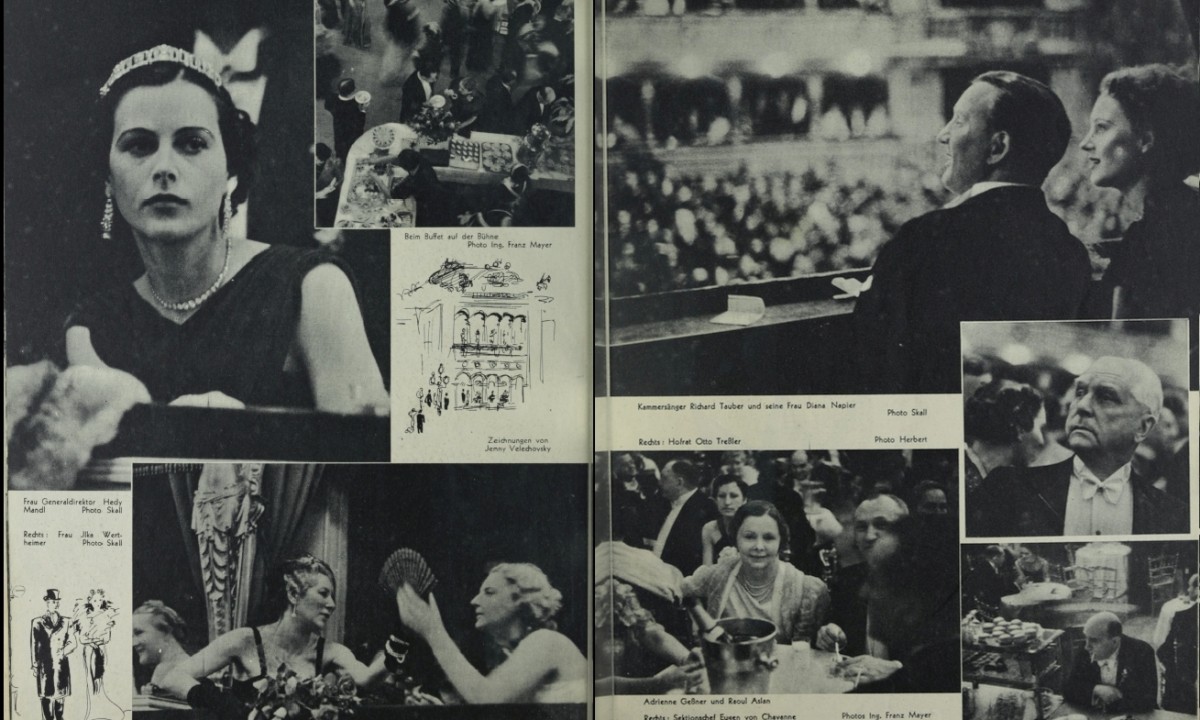 “It was his game to hold me captive.
It was my game to escape.
He lost.”
Hedy Lamarr on her marriage to Fritz Mandl

In its second January 1937 issue, the weekly cultural and lifestyle magazine Die Bühne devoted a total of four double pages to reporting on the Vienna Opera Ball. Fitting to the occasion, it consisted almost entirely of photos of numerous celebrities. The “noble young ladies and gentlemen’s committee” danced on this January 16, 1937 in rococo costumes, according to the ball’s motto “From Minuet to Waltz.” Austrian Federal Chancellor Kurt Schuschnigg shared a table with State Secretary Guido Schmidt. The well-known theater photographer Otto Skall spotted Baron Louis von Rothschild in a “famous Viennese loge.” In another, probably no less famous loge, he photographed chamber singer Richard Tauber with his second wife, British actress Diana Napier.

Among the actresses, actors, diplomats and politicians, upper class citizens and nobles who seem to be more or less enjoying themselves – or at least indulged in the pleasure of “seeing and being seen,” the large photo of “Frau Generaldirektorin Hedy Mandl” falls somewhat out of the ordinary. The attractive young woman does not give the impression of being very interested in the social event. Skall took a picture of her sitting in a loge and although a man wearing a tailcoat can be partially seen standing behind her, she, in a dark dress against a dark background, appears as if she were alone.

Hedy Mandl, née Kiesler, later Lamarr, was 22 years old, but looks significantly older and is strikingly thin, with shadows around the eyes, a pointed nose and a pointed chin. “She looks bad,” a Viennese woman of her generation would have said. From interviews and her memoirs published under the title Ecstasy and Me, we know that the marriage to armaments magnate Fritz Mandl, with whom she had been wed since summer 1933, did not go well for her. He was the industrialist and arms dealer, one of the richest men in Austria, who did business with Mussolini and Nazi Germany and supported the nationalist paramilitary Heimwehr group. She was the banker’s daughter, fêted beauty, and well-known, if former actress who felt more like a trophy than a wife: “He didn’t marry me, he collected me, just like a business success.” Otto Skall’s photo reveals what this situation had done to her. Did the photographer perhaps recognize that himself?

At the time of the 1937 Opera Ball, it had certainly long been clear to her that she had to break out of this unhealthy marriage. Apparently, she thought that just ditching her husband would not be enough. In order to free herself from his reach, she considered it necessary to leave her home and even the continent behind. After two failed attempts, she managed to escape in late summer 1937. With chutzpah and a lot of luck, she made it to Hollywood by way of Paris, London and New York, – gaining success there which had been denied to many others: She started her new life as a Hollywood star under the name Hedy Lamarr. In return, she accepted the fact that she entered from one type of bondage she had left behind into another.