The Jewish Museum of the City of Vienna is a place of encounter and understanding. It enables insights into Judaism, its holidays and customs, but also into youth culture. At its two locations, the Jewish Museum Vienna presents a unique overview of the history and the present-day life of Viennese Jews. We are looking forward to your visit!

The Jewish Museum of the City of Vienna is a place of encounter, interaction and understanding, which seeks to raise awareness of Jewish history, religion, and culture.

History of Jewish museums in Vienna

The first Jewish museum in the world was founded in Vienna in 1895, sponsored by a group of Viennese Jewish citizens. The collection focused on the culture and history of the Jews in the Austro-Hungarian Empire, particularly Vienna and Galicia.

In the interwar years Zionist objects were added, reflecting the new political discussion at that time.

The museum was closed by the Nazis in 1938 directly after the Anschluss. In the last year of its existence the inventory listed 6,474 objects. In 1939 the museum collection was transferred to the Museum of Ethnology and other institutions in Vienna. The Anthropology Department of the Natural History Museum in Vienna used some of the items for its anti-Semitic propaganda exhibition “The physical and psychological appearance of the Jews".

Most of the objects were returned to the IKG Vienna in the early 1950s, although some were not restituted until the 1990s. Over half of the objects have disappeared; it is practically impossible to discover whether they were stolen or deliberately destroyed. Objects once listed in the Jewish Museum collection turn up occasionally on the art and antiques market. The surviving objects – on permanent loan from the IKG to the present-day Jewish Museum Vienna – form a unique component of the current collection.

Jewish Museum of the City of Vienna

Two weeks after Kurt Waldheim was elected Federal President, mayor Helmut Zilk announced the founding of a Jewish museum in Vienna at the opening of the “Vienna 1900” exhibition at the Museum of Modern Art in New York. Jüdische Museum der Stadt Wien GmbH was founded in 1988, and the first exhibition opened on March 7, 1990, in temporary premises – the former ceremonial room of the IKG in Seitenstettengasse.

The original collection was built around the Judaica collection acquired by the City of Vienna from the collector Max Berger, who had died in 1988. In 1992 mayor Zilk and Ursula Pasterk, city councilor responsible for culture, designated Palais Eskeles at Dorotheergasse 11 as the Museum’s future location. The IKG agreed to give its collection on permanent loan to the Jewish Museum Vienna and to allow it to be studied and used by the Museum’s curators. After adaptation of the historical building, the opening took place in November 1993 in the presence of Vienna-born Teddy Kollek, mayor of Jerusalem.

In 1994 the library with over 30,000 volumes opened in the IKG building. In 1995/96 Palais Eskeles was modified (architecture: Eichinger oder Knechtl) to meet the demands of a modern museum, and a permanent exhibition (concept: Felicitas Heimann-Jelinek) was installed for the first time. In 1998 the archive was opened to the public for research purposes. 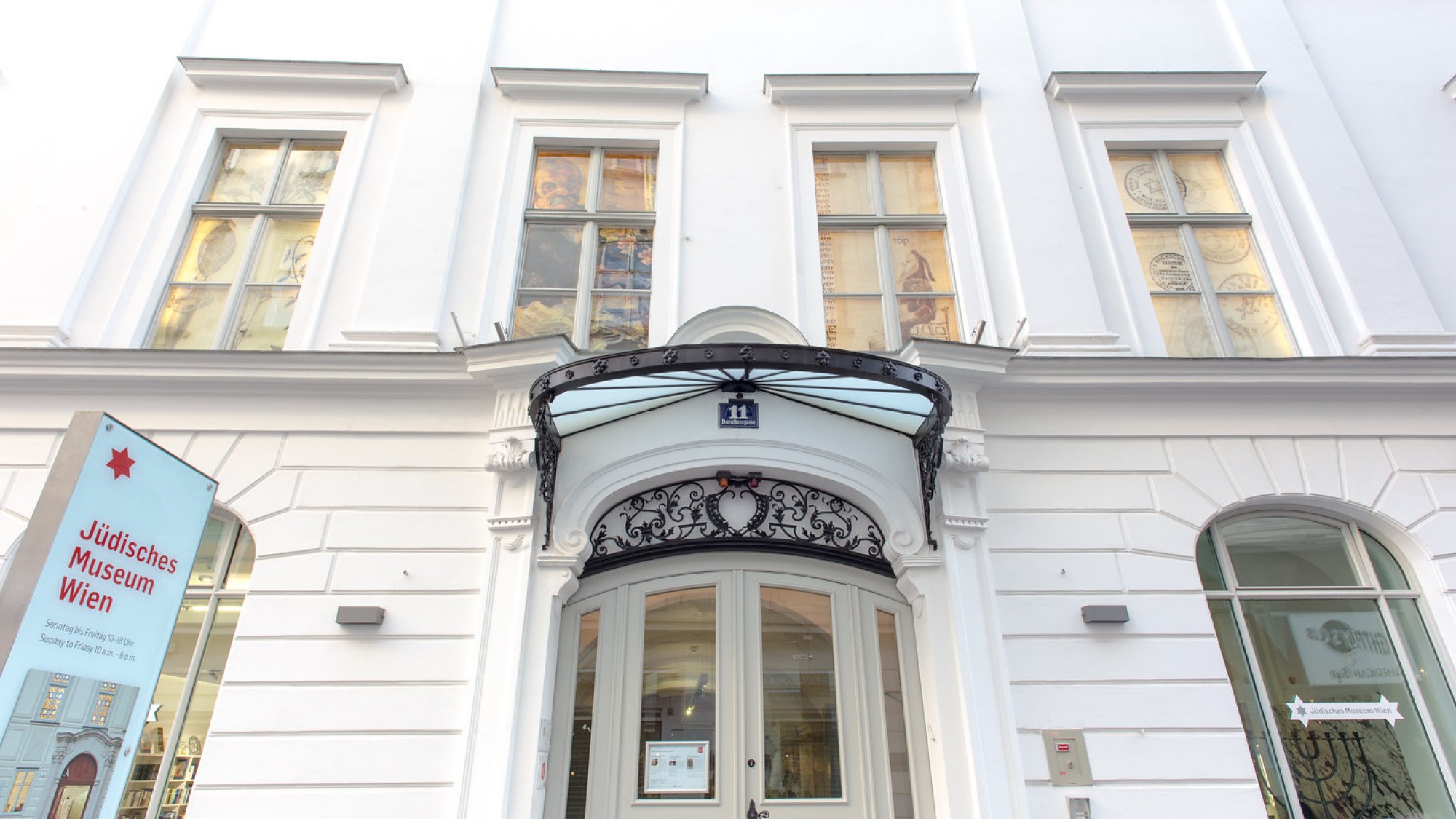 After a thorough overhaul of the building engineering of Palais Eskeles at Dorotheergasse 11 (project A01 architects), the Museum reopened in October 2011 after work lasting nine months. The auditorium was moved from the ground floor to the second floor, and the Visible Display on the third floor, which had been inaugurated in 1996, was redesigned and a media installation set up there. 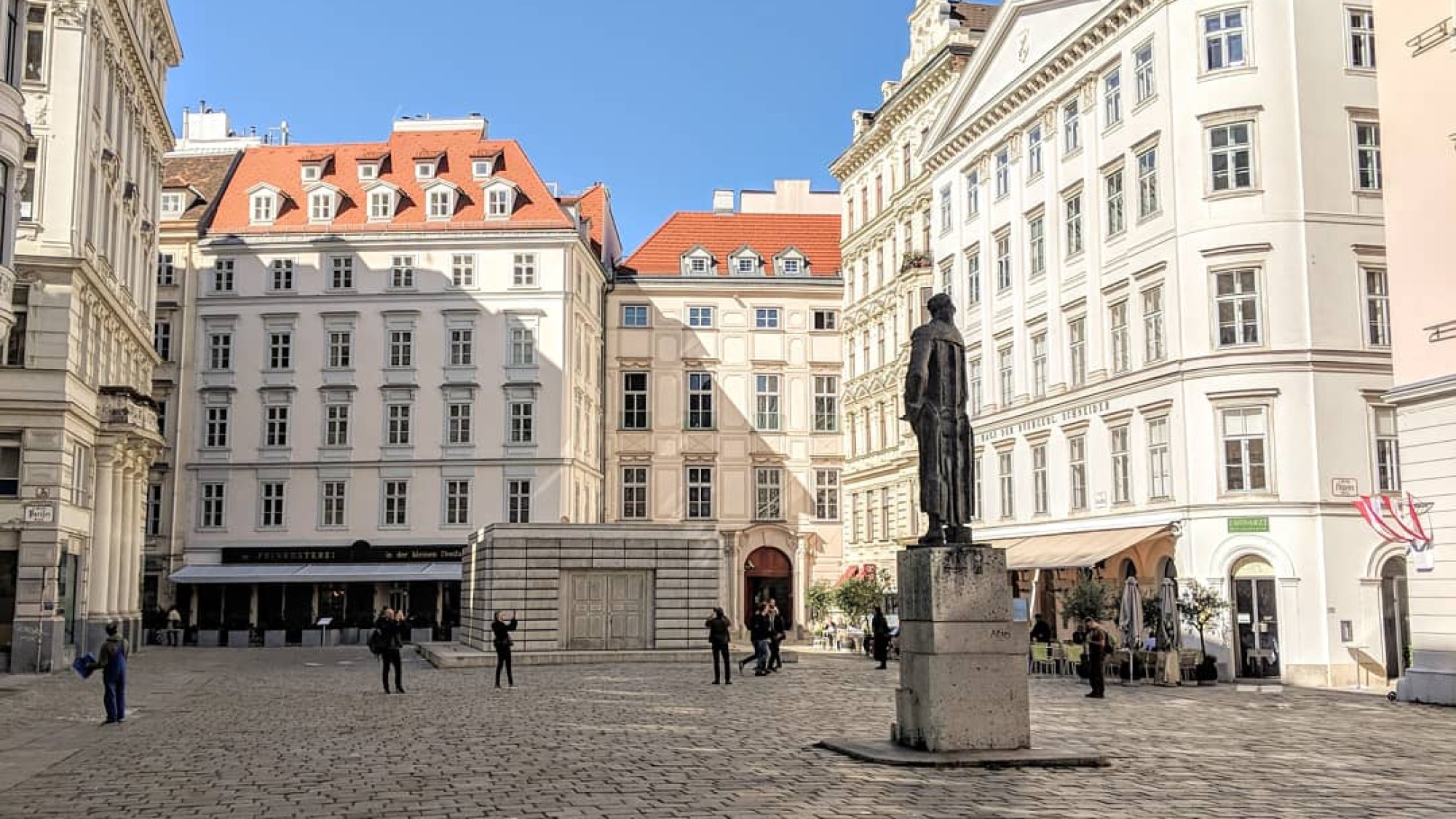 On October 25, 2000, a double inauguration took place on Judenplatz. First, Museum Judenplatz with the excavations of the medieval synagogue was opened to the public.

The architecture was by Jabornegg and Palffy, and the concept was devised by the Historisches Museum der Stadt Wien, as it was called at the time, in cooperation with the Institute for Jewish History in Austria. Second, the monument by the British artist Rachel Whiteread to the 65,000 Austrian Jews murdered during the Shoah, erected at the instigation of Simon Wiesenthal, was unveiled on Judenplatz.
In December 2010, ten years after the opening of Museum Judenplatz, the Jewish Museum Vienna devised a new permanent exhibition on medieval history and adapted the ground-floor rooms for temporary exhibitions.