Olympics at the Jewish Museum Vienna 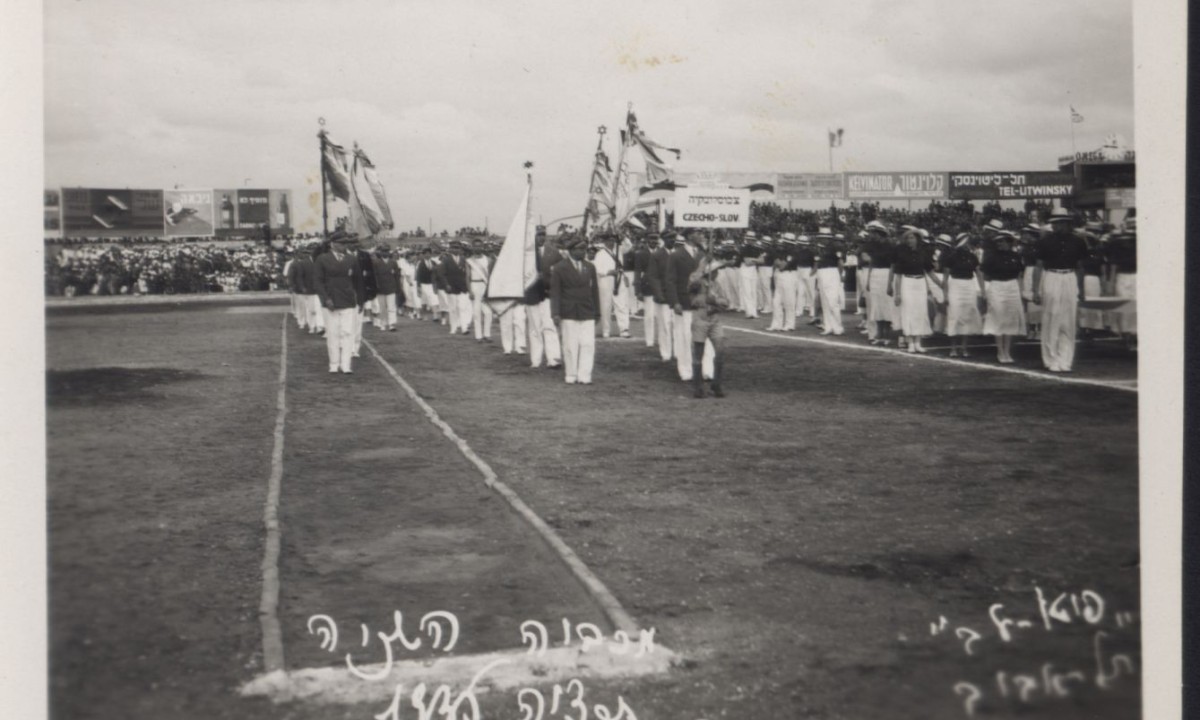 © JMW
In 2021, the Summer Olympic Games are being held without spectators in Japan due to a pandemic. The following objects, which can be found in the Jewish Museum Vienna’s inventory under the search term “Olympiad,” have likewise had to do without an audience, because those presented here have not (yet) seen the light of the exhibition public.

Only eight hits? Is the Jewish Museum Vienna really that unathletic? By no means! Entering the search term “sport” delivers 373 results. Because the European Soccer Championship was not that long ago, a reference to soccer should not be missing  74 hits. The Jewish sports club “Hakoah,” founded in Vienna in 1909, with an excellent soccer team under coach Béla Guttmann, is among the 416 entries for the term “Hakoah,” which means “strength” in Hebrew, while “Makkabi” scores 88 hits. Maccabi derives from Judas Maccabaeus, the leader of the small group of rebel warriors (called Maccabees) who fought and defeated the huge Seleucid army and rededicated the Jerusalem Temple in 164 B.C.E. Therefore, it is not surprising that many Jewish sports clubs in Europe and Palestine or Israel bear this name. The “Maccabiade” refers to the Jewish Olympic Games, which took place in Tel Aviv for the first time in 1932 and have been held every four years in Israel since 1952. The European version of the Maccabiah Games also takes place every four years; Vienna hosted the games in 2011, followed by Berlin in 2015 and Budapest in 2019.

But back to the Olympic Games. She is nearly unrecognizable with the bathing cap, isn’t she? Hedy Bienenfeld was a breaststroke swimmer and competed in the 1928 Summer Games in Amsterdam. In 1935, Hedy Bienenfeld travelled to Palestine with her husband and trainer Zsigo Wertheimer to participate in the Maccabiade in Tel Aviv. As a couple in love and a bit playful on a ship, the two give more of an impression of their private life than of their sporting ambitions. This bundle also includes images showing the entry of the teams into the stadium  note the particularly pretty outfit  and a swimming pool in Jerusalem. 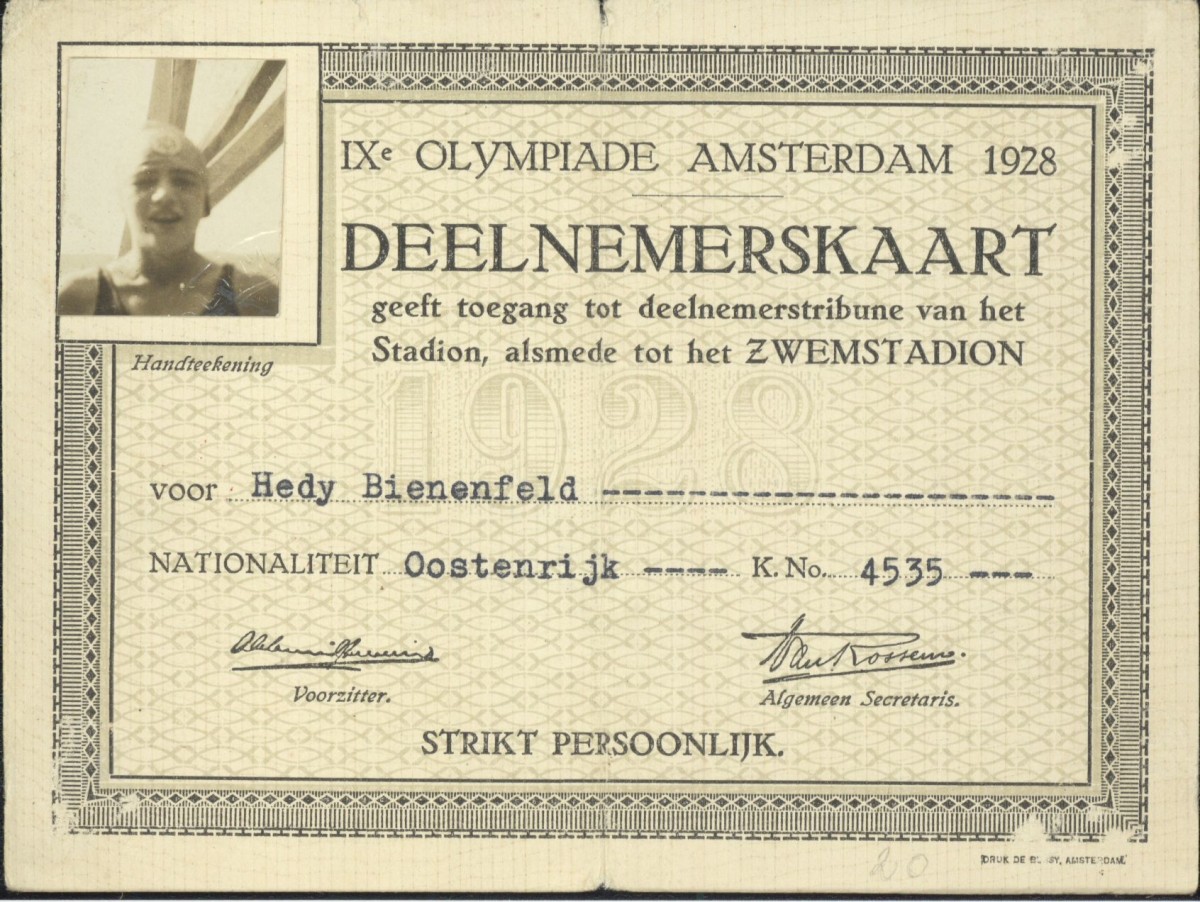 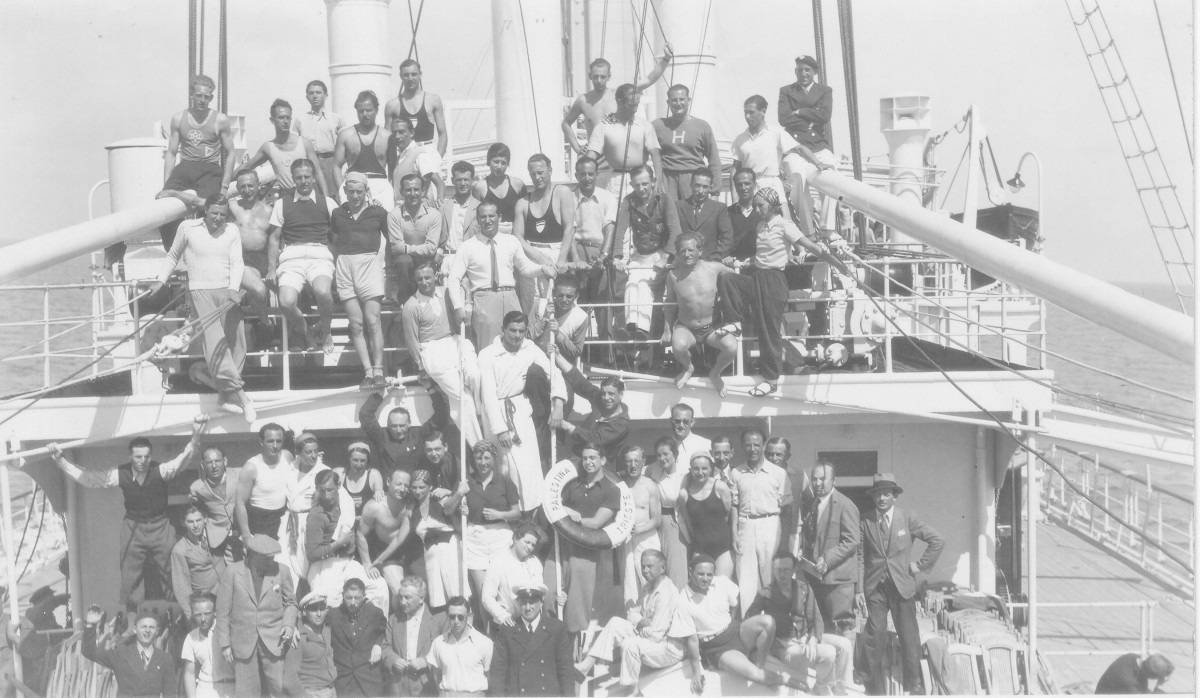 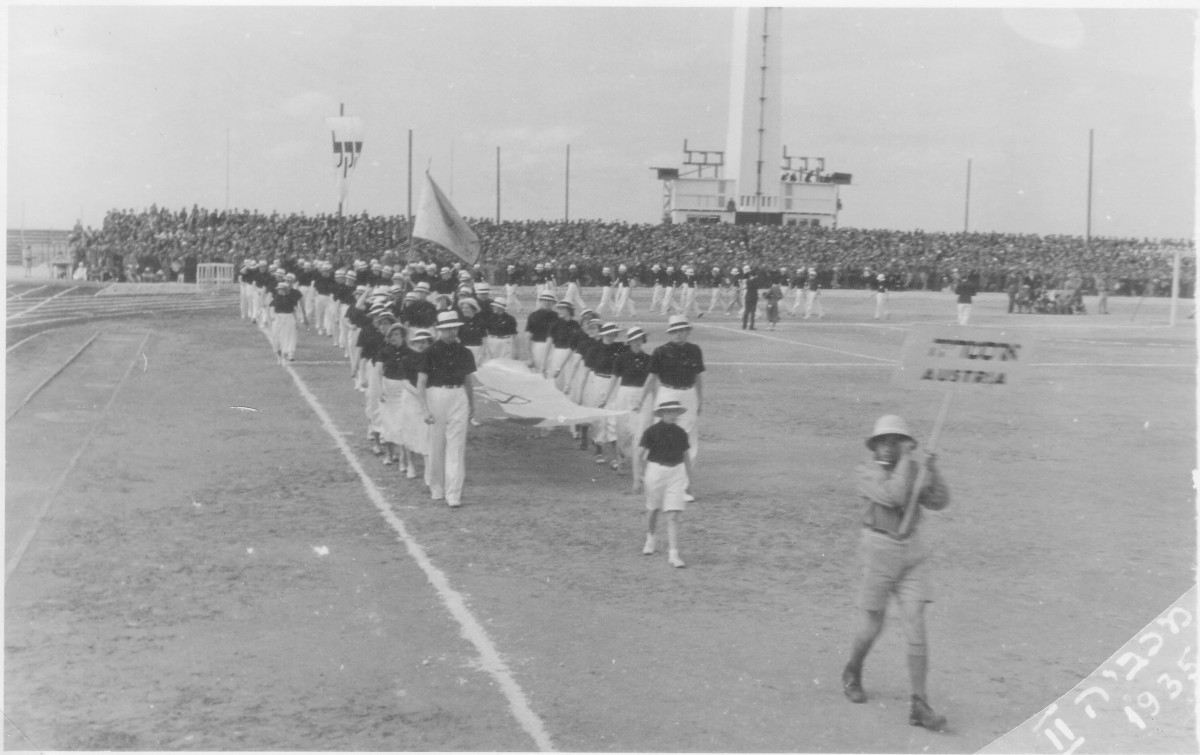 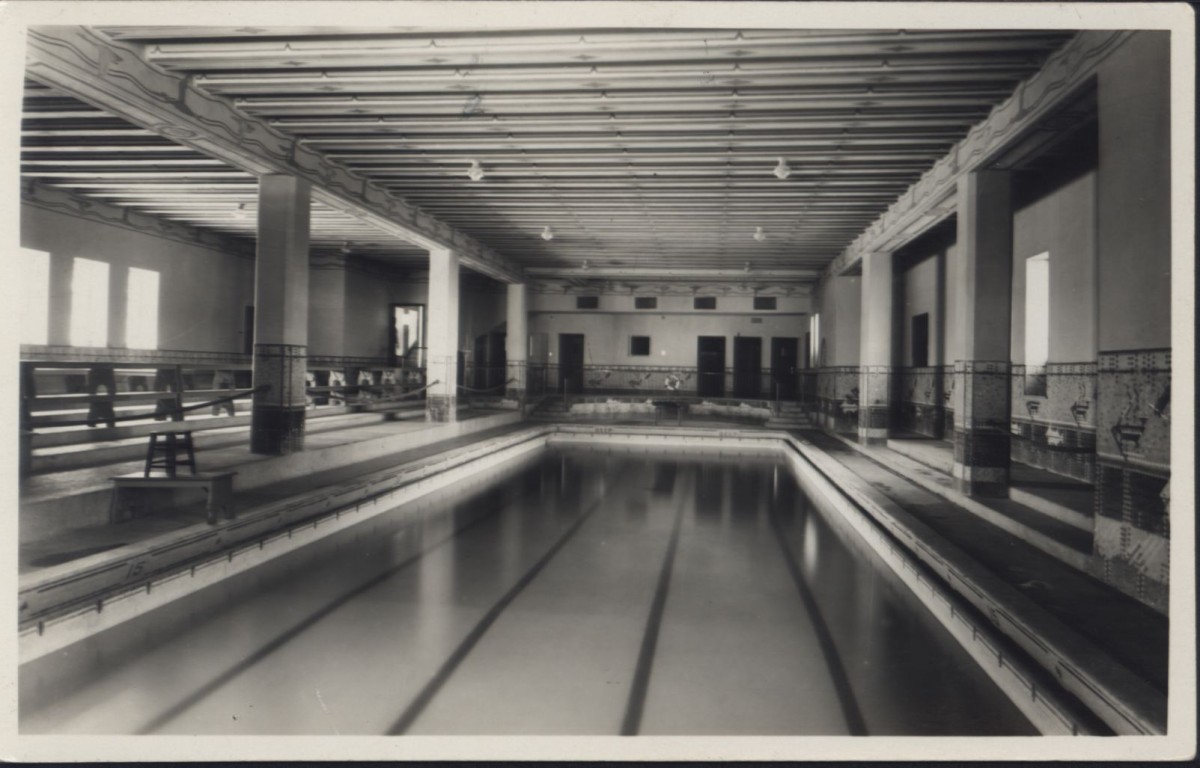 © JMW
Speaking of outfits: At Julius Krupnik’s Fashion Palace on Kaiserstrasse in Vienna-Neubau all sorts of things could be purchased, including fashionable items for women and men, of course. It is therefore obvious that something has to be found using the keywords “Olympic Games.” The “world record of precision” could be worn on the wrist. The Omega watch was used as a timepiece at the Olympic Games in Los Angeles in 1932 and in Berlin in 1936.

Olly Pordes, the commercial graphic artist whose estate is kept in the Jewish Museum Vienna, produced numerous advertising graphics for companies and occasions. Several of her drawings were on view at the “Buy From Jews!” exhibition.

Not only was Mrs. Pordes able to fulfill herself professionally; Ruth Karplus taught Max Delfiner’s daughter how to draw. Delfiner had owned the Herzmansky company since 1933. Ruth had to keep her professional activity a secret from her father, “Oberbaurat” (Chief Building Councilor) Karplus. After emigrating to the USA, Ruth Rogers-Altmann became a successful designer and, as an enthusiastic skier, a sports fashion consultant. 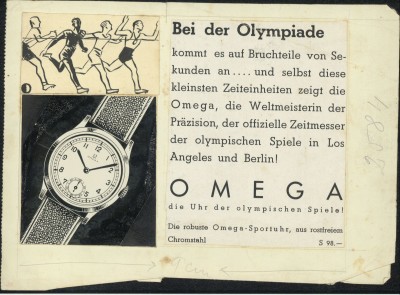 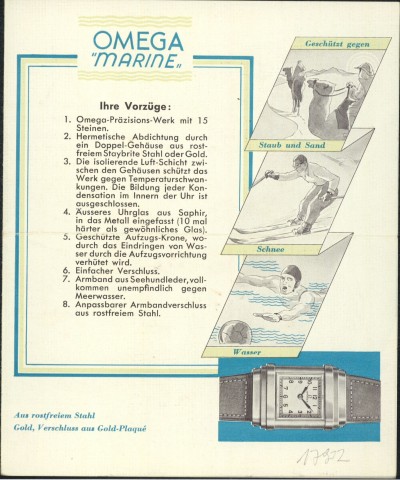 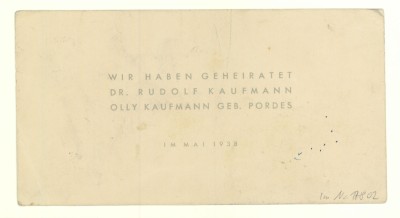 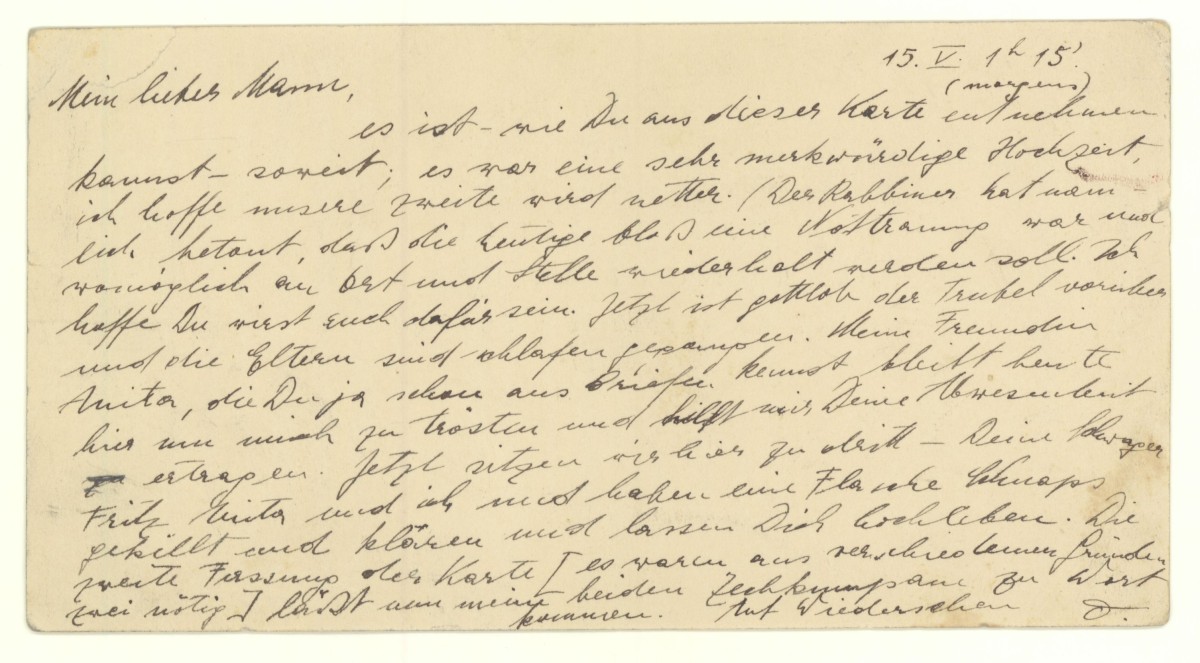 © JMW
When conducting research in “ANNO,” the virtual newspaper reading room of the Austrian National Library, Olly Pordes can also be found – in the scope of numerous news reports, including from the Vienna Fencing Club about an event on March 12, 1931, which she emceed as the conférencière and stressed the importance of fencing as a sport for young people. At a costume party of the Vienna Ice Skating Club on February 12, 1924, she and Lilly Weinwurm played the roles of Max and Moritz at a “Children’s Festival for Big Children.”

The fact that Olly Pordes married Dr. Rudolf Kaufmann in March 1939 has been passed down to us on a card from her estate, on the back of which she wrote this text:
“15. V. 1 h 15’ / (morning) / My dear husband, as you can gather / from this card – the time has come; it was a very strange wedding /, I hope our second one will be nicer. / The rabbi name- /ly emphasized that today’s ceremony was just an emergency wedding and / should possibly be repeated on the spot. I / hope you will be for it, too. Now thank God the hubbub is over / and the parents have gone to sleep. My friend / Anita, whom you already know from letters, is staying here today / to comfort me and is helping me endure your absence. / Now the three of us are sitting here – your brother-in-law / Fritz, Anita and I and have a bottle of schnapps / chilled and are toasting and giving you three cheers. The / second version of the card [for various reasons / two were necessary] now allows my two drinking companions to have their say. Auf Wiedersehen. O.”

The reason why her husband was not even present cannot be ascertained from this document. The rabbi performing the wedding ceremony was Arthur Zacharias Schwarz, the father of Tamar Schwarz, who was to marry Teddy Kollek. The Kaufmanns tied the knot at the synagogue on Müllnergasse in Vienna-Alsergrund.

Where else but at the Jewish Olympic Games do the “mind sports” chess and bridge, which are performed while sitting, count among the disciplines? The International Olympic Committee recognizes chess and bridge as types of sports, but does not consider them to be Olympic disciplines.

The Jewish Museum Vienna keeps a medal in its collection in memory of Wilhelm Steinitz. Born in Prague as Wolf Steinitz, Wilhelm reigned as the first recognized world chess champion from 1886 to 1894. He is considered a critic of the “romantic method,” which features quick tactical moves. His strategic and positional principles are still regarded as the basis of modern chess theory. 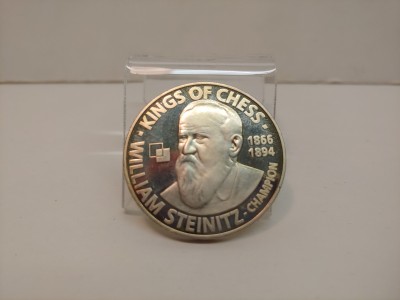 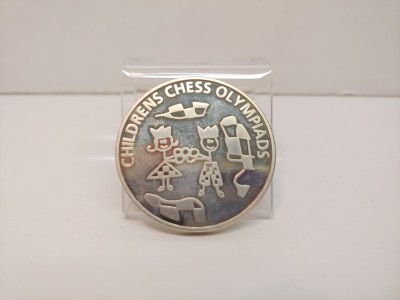 © JMW
Steinitz, who came to Vienna to attend university, studied mathematics and earned money by, among other things, maneuvering the chess pieces across the board at an incredible speed at Café de l’Europe on Vienna’s Graben. He also worked in England and the USA, where Wilhelm became William, edited a chess newspaper, and died in New York in 1900. The reverse side of the medal points out the “Children’s Chess Olympiads,” which have been held since 1927.
END_OF_DOCUMENT_TOKEN_TO_BE_REPLACED
Jewish Museum Vienna