Out and about in Our City! – Döbling 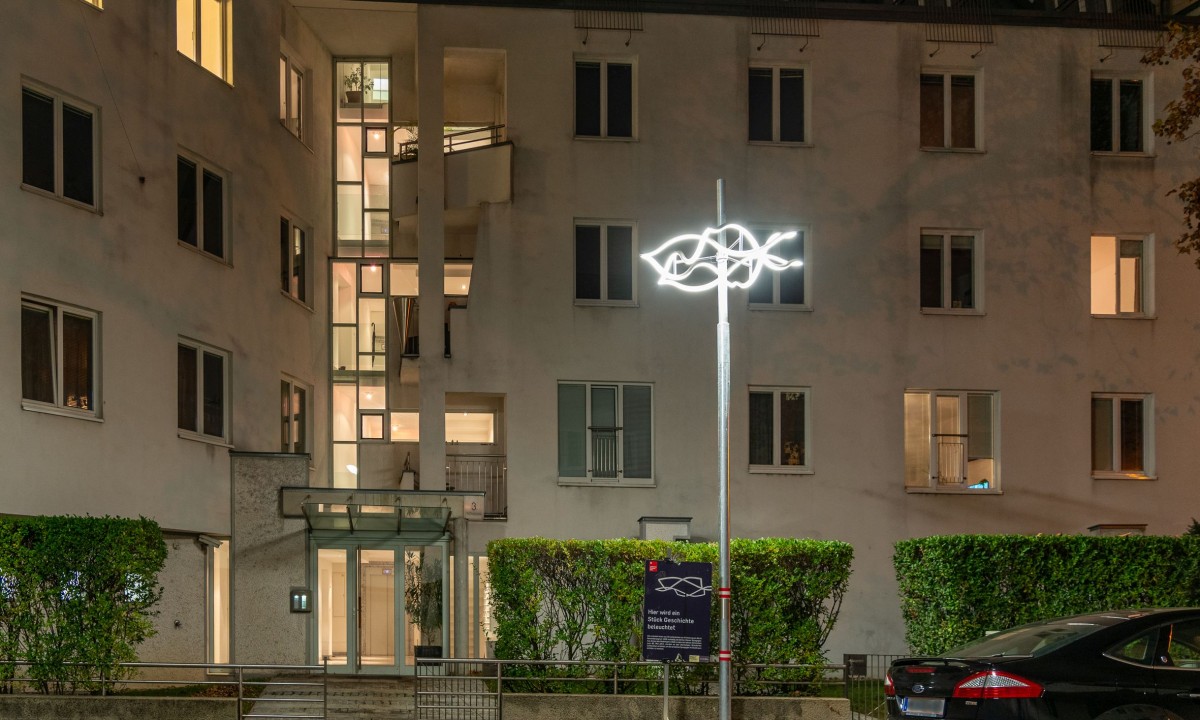 The search term “Döbling” yielded 29 hits. As befits a functioning inventory system, each object has an inventory number. During his first visit to Vienna since he had left his hometown in 1935, Teddy Kollek, the mayor of Jerusalem at the time, presented Object 1 to his fellow mayor Helmut Zilk at the newly founded Jewish Museum of the City of Vienna. The Torah shield (Hebrew: tas) is on loan from the holdings of the Israel Museum founded by Teddy Kollek. At the moment this blog text was written, the latest assigned inventory number was 29005. This can change at any time, as the collection keeps growing through donations or new purchases. The objects that will now accompany us to Döbling are presented in ascending order. Unless designated as a gift, the objects introduced here, which all found their way into the museum in 1992, are on permanent loan from the Jewish Community of Vienna. Informationen zu den unterschiedlichen Sammlungsbeständen 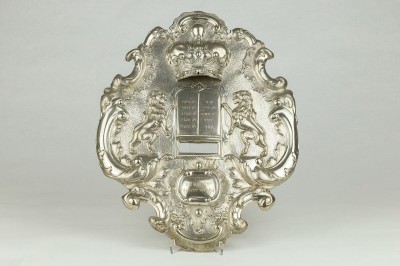 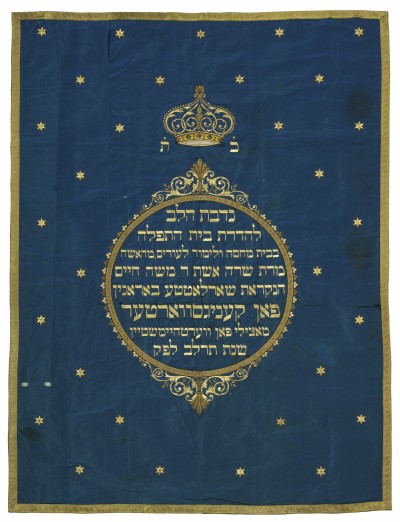 © Jüdisches Museum Wien
This textile is a Torah curtain (Hebrew: parochet) that hangs in the synagogue in front of the cabinet in which the Torah scrolls are stored when they are not being read. Donated by Sara Königswarter, it was used in the synagogue of the Jewish Institute for the Blind at Hohe Warte 32, which her husband Moritz had established in 1860. He was supported by the doctor and philanthropist Ludwig August Frankl, who our visitors in the permanent exhibition Our City! also encounter as a revolutionary from the year 1848. The Institute for the Blind was the only institution of its kind in Europe from its foundation until its closure in 1942.
This book in Braille contains two short stories by Karl Emil Franzos. It was printed for the pupils of the Institute for the Blind on the Hohe Warte. This institution printed the necessary textbooks itself “to provide blind children with a thorough intellectual education and training for a profession,” as reported in the publication Unser Fürsorgewerk in 1930. 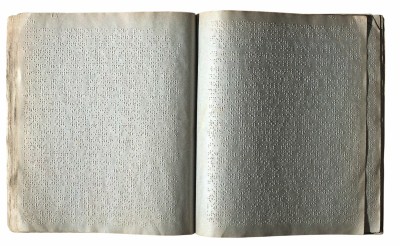 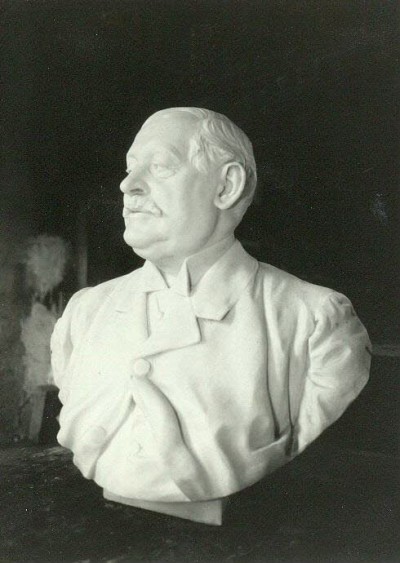 © Jüdisches Museum Wien
The bust depicts David Gutmann, Ritter von Gutmann, who was born in Leipnik (Lipník nad Bečvou) in Moravia on December 2, 1834 and died in Vienna on May 14, 1912. Together with his brother Wilhelm, he established the company “Gebrüder Gutmann” in 1856. A major philanthropist who dedicated most of his life to charity, David Gutmann built an orphanage for Jewish girls at Ruthgasse 21 in the 19th district.
The metal container is a zedakah box, used for donations, bearing the Hebrew inscription “Chevra kadisha” and the place name “Döbling.” The slot at the top accepts coins, the opening in the curve paper money. “Zedakah,” Hebrew for “righteousness,” means that it is a religious duty to take care of those who cannot make it on their own. This understanding led to the emergence of numerous charitable institutions in the period before the formation of the welfare state, especially during and after the First World War. When the Viennese population grew rapidly and the social infrastructure could not keep up with this pace, the Jewish community played a decisive role in the development of social institutions. The “Chevra Kadisha” is a “sacred society,” a so-called burial brotherhood that prepares deceased members of the community for interment. In every Jewish community there is such a Chevra Kadisha and even before there is a synagogue, the congregation must have a cemetery – one can pray anywhere, but there is a special place for the dead. 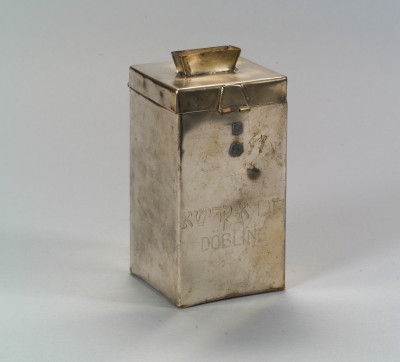 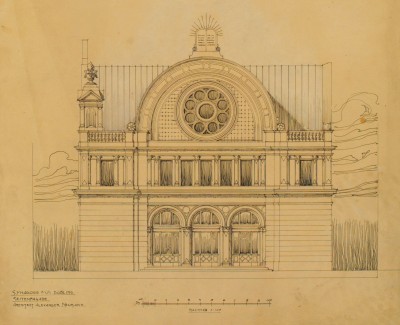 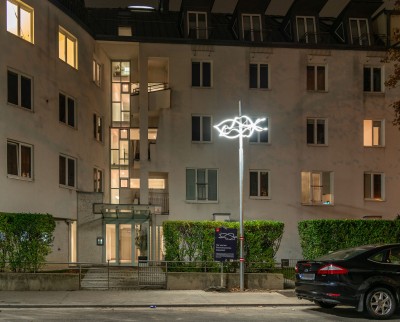 © wulz.cc
Executed and colored in ink and pencil, ten plan sketches of the synagogue in Döbling, which was located at Dollergasse 3, are preserved in the museum. The architect of this place of worship was Julius Wohlmuth, who had just completed his training at the Staatsgewerbeschule (State Trade School) and lived in Döbling himself. The Döbling Temple Association initially intended to build the synagogue on Gatterburggasse, but the construction project exceeded all financial limits and the association was on the verge of dissolution. On the initiative of Julius Lederer, a smaller structure on Dollergasse was selected, purchased with the financial support of the religious community, and converted into an Art Nouveau synagogue. In addition to the prayer room with women’s gallery, a Hebrew language and Bible school, the “Frauenwohltätigkeitsverein f. d. XIX Bezirk“ (Ladies’ Charity Association for the 19th District) and the “Bund Jüdischer Eltern, Wien XIX” (League of Jewish Parents, Vienna 19th District) were all housed at this address. Julius Wohlmuth died at the age of 57 in 1931. The synagogue, which opened in 1907, was partially destroyed during the November Pogrom of 1938, later deconsecrated, demolished in 1995 and replaced by a modern residential building.

Since 2018, the light symbol “OT” has stood at this address and at 24 other locations in Vienna to commemorate at least 25 of the synagogues in Vienna destroyed in November 1938 or later.

A poster from 1935, inviting people to a “cabaret under chestnut trees,” ended up in the Jewish Museum Vienna collection in 1996, the same year the exhibition Stella Kadmon. Die Theatermacherin took place. In 1931, Stella Kadmon founded her own cabaret, “Der liebe Augustin,” in the basement of Café Prückl in Vienna. During the summer months from 1935 to 1938 the cabaret turned into an open-air theater on the Hohe Warte. The program was offered from 9:30 to 11:30 in the evening, and tickets were available at a ticket office on Wiener Graben for a bargain price of 1.90 Austrian schillings. According to the poster, visitors sat high and dry, even when it rained. After the so-called “Anschluss,” the theater was closed. Stella Kadmon emigrated to Palestine via Belgrade and Greece, where she said she would rather learn Hebrew before pursuing a profession other than the theatre. She returned to Vienna in 1947. 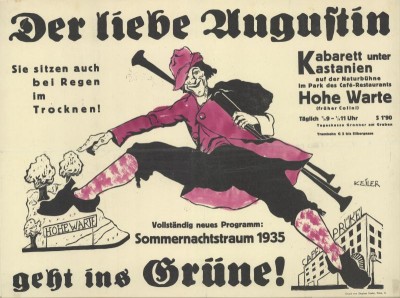 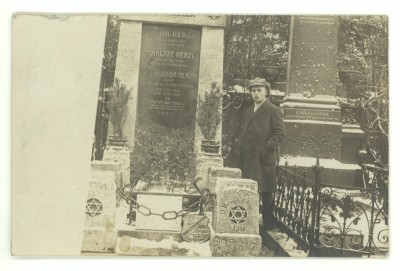 The Jewish Museum Vienna received three photos, one of which shows the grave of Theodor Herzl’s family at the Döbling Cemetery, from an anonymous donor. Theodor Herzl’s parents Jacob and Jeanette Herzl and Theodor, who died in 1904, were buried here. It was Theodor Herzl’s wish that when the Jewish state became a reality, his remains and those of his parents would be transferred there, which happened in August 1949. This can be read on the stone of the now empty grave of honor. The identity of the young man in the photo remains a secret of the object itself.

This residence registration form of the artist Erna Lederer was donated to our museum’s collection in 2017 by her grandson Eytan Lederer from Haifa. Eytan Lederer is the great-grandson of the founder of the synagogue on Dollinergasse. The document attests to Erna Lederer’s deregistration from her home at Scheibengasse 12 in 1190 Vienna, where she had lived since November 10, 1935. The date of her departure is given, but not her new address. Born in Vienna in 1884, Erna received her first training at the Vienna Art School for Women and Girls. On February 11, 1909, she married the industrialist and chemist Gustav Lederer, and after studying in Berlin, the family moved to the villa on Scheibengasse in 1928. After their divorce in 1929, Erna married Ernst Schwadron in 1938, the architect of her villa, with whom she fled to the USA via France that same year. A large part of her oeuvre was lost during the flight. Erna Lederer became an American citizen and moved to Haifa in 1968, where she passed away in 1981. She was featured in the exhibition The Better Half. Jewish Women Artists Before 1938  held at the Jewish Museum Vienna in 2016. 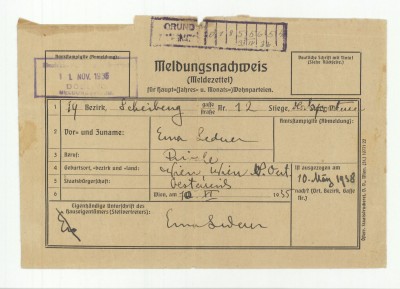